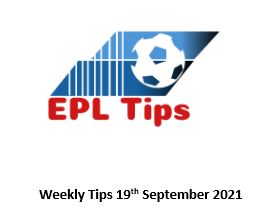 Despite a weak start to the season offensively, I believe things are starting to click now after a decent performance against Napoli. Rodgers has strengthened his team significantly and I think the future is bright for this squad. They should manage at least one goal. I’d tip them to get a result here too.

Liverpool have started the season like last season never happened. They’ve rediscovered the hunger to obliterate teams and I expect Crystal Palace to have been dealt with by the 60th minute. The home side are enjoying themselves and cutting teams open with ease.

Even though this game is coming early in the season, both teams will know the signifcance of it. Neither team will often feel they are well placed to get three points but this is an opportunity for both teams to achieve that here. I expect an open game and perhaps both teams will even score twice.

I anticipate a tight game but think Wolves will use their know how and experience to handle the visitors threat and get the win. Even though they’ve already lost three games, they were all very tight 1-0 losses against the best in the division.

As bad as Arsenal have been, Burnley have recorded even fewer points. Arsenal will need to show some resilience but they definitely have the talent offensively to hurt the home side. They also come into this on the back of their only win of the season and with more players available than previously.

For how much stronger a squad Leicester have, these are odds worth jumping on. If you want to be even braver, an away with and both teams to score would push this treble to 20/1. It’s been a decent start to the season for the Seagulls, but they’ve only beat teams they were expected to. At home to Everton, a similar team to Leicester, they were well beaten 2-0.